The Kitchen House by Kathleen Grissom

I moved this over from my other blog; read in 2010 and the other day someone mentioned it again; I  pulled it off my shelf and looked for my review.   I  appreciate  a novel that teaches me something and this one  did; well if the research that goes into the book is good, it follows there is often something to learn.  That is why James Michener is my all time favorite author and now David McCullough.  I enjoy and appreciate authors who research their subjects so thoroughly as this author did. 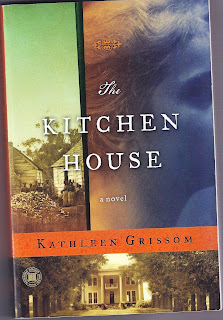 First "The Kitchen House" by Kathleen Grissom, published by Simon and Schuster in 2010, 377 pages, selected  by our book club, a story set in post colonial  (1790's) Virginia about Lavinia, an Irish orphan girl who becomes an indentured servant to the tobacco plantation owned by the captain of the ship on which she'd been migrating with her parents and brother.  When both parents die the children are separated and sold off.  A seven year old girl is alone, that is Lavinia who is sold to the captain.  Lavinia is raised with the black slaves particularly by Belle who runs the kitchen house where the meals are made for the family.  True to the history of the era, there was a separate house behind the plantation where meals were cooked.    The novel spans the life of the Captain, reaches back to the time of his parents and then forward to his son and is narrated alternately by Lavinia and Belle.  It is  a good tale with many intriguing characters, Mama Mae, Papa George, Uncle Jacob are all slaves to the household and compared to the field slaves, they are better off.  The captain's wife and mother of Marshall and Sally battles opium addiction and finally loses herself in that after Sally's tragic death.  The story calls attention to  some of our nation's history that I had forgotten, that of the indentured servants, mostly white Europeans, many Irish  who lived on the plantations and were part of the slave community despite their white skin.  This is not a pleasant story in many parts but it is well written and compelling reading.  The characters do not always do what the reader thinks they will and that draws us along.

Grissom is a new author to me, but I would read other of her books; she explains in her extensive Author's Notes and Conversation at the end of the book  that she felt guided by voices from the past to  develop this tale while she was researching the history of the area.  Pg. 368, " I tried on a number of occasions to change some of the events (those that I found profoundly disturbing) but the story would stop when I did that, so I forged ahead to write what was revealed.  I am forever grateful to the souls who gifted me with their sharing." She explains that she wrote the prologue in one sitting after being inspired by a map she found while renovating an old plantation tavern in Virginia.  When asked if she will write a sequel she says perhaps.  She took the names of the slaves found in her research for the numerous characters.  She offers advice to aspiring writers, first to read and to have an excellent foundation in reading and then to persist.  I am sorry that I will miss our book club  discussion about this  good read, but we will be traveling.